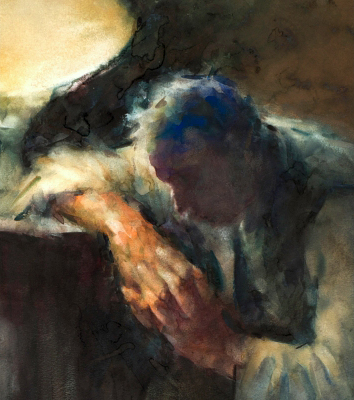 being humane was one of his key characteristics; he was deeply affectionate with and understanding towards the old and the needy. It was these people who he paid tribute to with muted lights and velvety colours all throughout his life. He highlighted their figures against the dark and bleak background; his brush applied radiant colours to light up their anguished faces. One of his most shaking pictures is the one entitled Farewell painted in 1928 where, under the canopy of light emitted from the small oil lamp, sits a grief-stricken old peasant by his dying spouse, the whole scene clad in the colours of deep mourning.
Every time Horváth painted a picture he had spent a lot of time making studies of the subject. These sketches helped him turn vision into image. The study he made for Farewell was later awarded with a state prize issued for graphics, and the painting itself won the prestigious Izidor Halmos Award
Rezső Becht     1961