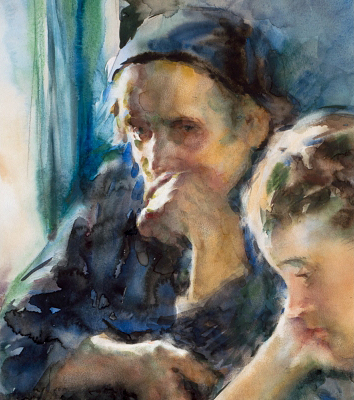 Once he recovered, he went to his new workplace, a state school in Sopron where he settled down — and stayed for the rest if his life. This historic town had inspired so many painters before; besides, the adjacent Bánfalva and Brennberg reminded him of Nagybánya.
This first success, the appreciative friends and the fact that locals were buying more and more of his pictures somewhat bolstered his confidence. As a result, he became very productive and painted a series of portraits and interiors, and he painted some large paintings that brought him even more success. The first picture in this series was a composition with two figures entitled Confession from 1927, which accurately represents the first epoch of the 36-year-old artist. It was awarded with First Prize at the 1929 exhibition of Hungarian Watercolour and Pastel Painters.
Although he played with the dispersion of light somewhat clumsily, he applied powerful patches of colour and was brave enough to leave some of the odd blotches on to illustrate the dramatic internal struggle tormenting the girl, confessing to her debauchery and the mother listening to her confession. This picture is regarded as a major milestone in Hungarian watercolour painting for this work depicts a topic that has been reserved for oil and with such professionalism and making such novel impacts that had been unprecedented in arts using watercolour only
Rezső Becht     1961

the title is important either since we would otherwise not be able to understand what goes on in the head of the elderly lady and her daughter. All is silent in the picture, just like in most Horváth paintings in general. Silence itself seems to be a topic to be depicted by this peaceful master
Gyula László     1987