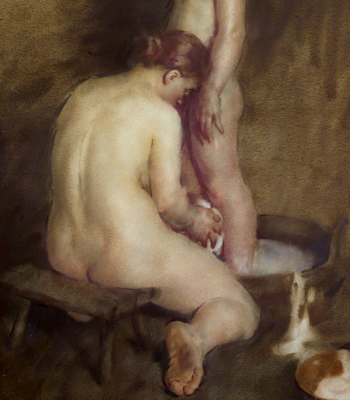 it was during the early 1930s when he stumbled on a new form of expression, a technique that he mastered and stayed loyal to throughout his career. His eyes could see things somewhat softer than ours, softer than it could have been expressed via oil, tempera paint, pastel, or even via traditional watercolour. This new technique also involved watercolour put on a specific sheet, the so-called Whatman paper. This required a great deal of extra concentration and presence of mind, especially on his larger paintings, for not only did he have to possess perfect drawing skills but also had to be constantly alert and watch how fast the sheet was drying while making sure that the colours and tones were applied in the right proportion and at the precise moment. And what was the result? Soft velvety shades, as if they were breathing, glimmering lights with silvery incandescence and, in terms of overall effect, a perfect unity of form and colour seamlessly merging into one another. Armed with this novel technique, he could now focus on another task that he considered the noblest task of painting: depicting nude figures. The opalescent colours of the naked body, the expression of myriads of delicate greys are two dominant features of his first nudes. In 1932 he painted a large composition with two nude figures entitled Hungarian Samaritan, which was bought by the Budapest Gallery but unfortunately disappeared in 1945.
But then came other nudes all proclaiming the beauty of the healthy female body and painted with the purity of intention, and thus putting eroticism in the background. With the first versions of a series entitled In Front of the Mirror he was awarded with 1st Class State Award for Watercolour in 1934 and the Szilárd Röck Prize for his picture entitled Bathing in the same year. With its seclusion and sculpture-line composition and with analogously similar tones, this picture is regarded as one of the most significant works in Horváth’s career
Rezső Becht     1961