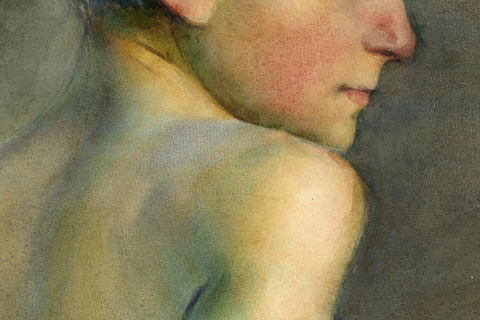 in the meantime, something happened to me that, on the one hand, had an extraordinary influence on me and strengthened my perception as a painter and, on the other hand, directly influenced my future development. During a museum excursion in Vienna, I saw a small picture — only a few inches big — depicting two hands with exquisite finesse of tone and a great edge of contour. The little picture was the work of Wilhelm Leibl, the greatest figure of 19th-century German painting, who, through the Munich-based Hollósy, also influenced the Nagybánya group of painters and hence Hungarian painting.
Most definitely, this little picture must have contributed to my becoming even more engrossed in my work. Now, I feel as if I have learnt the most from Leibl without ever meeting him, “ab invisis” as it were. It is neither the professional heritage of painting, nor the genre I have in mind, since Leibl did not paint nudes, but rather his superior ethics, his honesty, the preservation of principles, the artistic morale, according to which one cannot make compromises and must crave to achieve the highest quality in one’s smallest deeds. The moral his art has audibly been suggesting to me up to this day, I have tried to hold on to all my life
József Horváth     1959