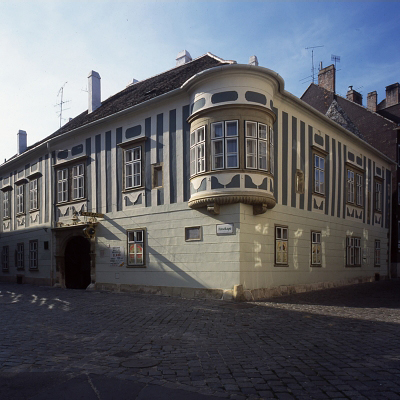 one of Sopron’s renowned listed buildings is the Caesar House, located on the corner of Hátsókapu leading to Várkerület (Central Boulevard) and St George Street. The building has retained the imprints left on it by the past 1,700 years of urban construction and 800 years of urban culture.

The history of the building is inseparable from the adjacent town walls. The area was once part of the Roman province where a Roman tower and the remains of residential buildings were unearthed, which were destroyed when the wall was erected in the 3rd century.  When the current urban structure evolved in the Middle Ages, the gate of the wall was moved from the Roman gate (Fegyvertár Street) to 140 metres further to a place called Hátsókapu (Rear Gate). It was on this site where a predecessor of the current Caesar House was built, right adjacent to the tower of the triple town wall constructed between 1280 and 1340. Some researchers say that the building complex standing on this spot was made up of two wings, while other experts claim it might have been as many as three.

According to the documentation of Sopron’s public administrative restructuring in the 1300s, the town’s defence system had already been in place, and a land register from 1379 confirms the existence of a building on the same spot. We can also learn from the official real estate registers and from various bills of sale concluded in this period that one half of the building with separate premises was built against the town wall, while the other on the corner of Salt Market (Today’s Orsolya Square) and St George Street. Basing on local construction conventions we can assume that these buildings had gables facing the street, and properly brick fences with a gate inside.

During the reconstructions works of the building archaeologists found several Gothic details — which they preserved for the public to see — including the north-west gable, a few Gothic windows on the first floor, the stone vault and the stone frames of the gate with the stairway to the cellar. They also kept the part where the building was joined to the wall. The excavations also proved that the building had another floor in the 15-16th century, and each wing held a sizeable wine cellar.  The height of the building was also confirmed by an inscription ‘1549 D. A.’ found on one of the chimneys. Another reconstruction, when the house was joined to the triple town wall, is believed to have taken place in the 15thcentury and this is when the inner town wall took on the ‘role’ of a façade. It was also in the 15th century when the 11th century earth mound was lowered — which was to be used as a pavement in the late Middle Ages some 2.5 metres above the current street level. If we step out onto the battery garden in the courtyard of the Caesar House, we can still see the façade which once was the town wall, while on the other side of the gable there is the 14th century mediaeval crenelated battlement, built on ancient Roman fundaments. 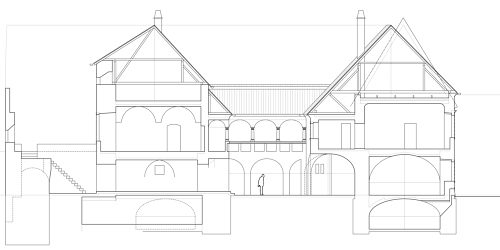 After the spread of Reformation in the 17th century, the material and intellectual consolidation as well as the rich noblemen settling in Sopron lent new momentum to the town. The process was sped up after the fire of 1676 that devastated most of Sopron’s Gothic buildings. This is when the Caesar House received its current form; the mediaeval parts were joined together in the courtyard and the outside walls dressed in early Baroque with a touch of Renaissance. The one-storey building has stuccoed ceilings in the rooms on the top floor. In one of the corner rooms, the centre is oval shaped, while the room above the gateway is rectangular, framed by tendril and shell ornaments. The stuccoes were made by Italian sculptor P. A. Conti at around 1700s. The inner courtyard of the house had a Tuscan arched colonnade to satisfy contemporary requirements of civilian representation. The house has apron windows opening to the street and a cylinder-shaped closed corner balcony. Its gate has Tuscan pillars, with volutes over the gate. Today’s façade is ornamented with pilaster strips, which were prepared a good hundred years later, in the second half of the 1700s. 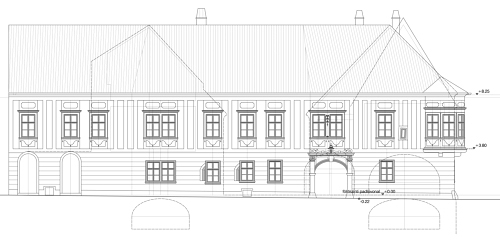 The building — already referred to as the “Green House” — looked as depicted above when the Rear Gate was pulled down in 1821. The owner of the house purchased the section of town wall which opened up with the removal of the gate in 1822, and first created a garden in it, then had the lower part of the wall turned into a shop. When the whole construction became unsteady, he had the remaining wall dismantled and a new two-story annexe fitting the Baroque façade erected.

The building suffered major injuries in the bombings of 1944-45. The rectangular balcony protruding from the first baroque axis collapsed. The reconstruction of the listed building focused on rehabilitation in the residential building. While attempting to preserve both the Gothic and the Baroque details and character of the building, the council had five new apartments added to the house and one two-storey flat in the wing near the battery garden. This way a narrow passageway opened up with access to the former town wall, linking the courtyard with the south-western side of the battery garden and producing a 150-metre section of walkway. The historical parts of the buildings, the wine cellar, the colonnaded inner courtyard, and the stuccoed rooms on the floors were all refurbished and became a major attraction for tourists and art lovers. 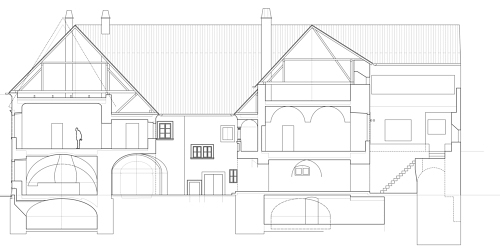 After Sopron was elevated to the rank of a free royal town, in the 15th century, its economy started to prosper. The number of new citizens, especially those speaking German, grew considerably. Among them was the owner of a land register dating back to 1379, a certain Martin Biberauer who served as the town’s chamberlain, and a merchant (Keresztély) from Mödling residing in the neighbouring building. These two buildings were passed into the ownership of the Schadendorfer family, also involved in commercial activities, in 1404 and in 1459. From the 15th century onwards, there appear names of local officers and noblemen on the documents. The city council at that time did not have their own building so the house of the presiding town judge was regarded as the town’s central office. The same rule applied during Matthias Schadendorfer’s term of office, too. It was in the Caesar House, the magistrate’s house, on 12 March 1420 where the council discussed the case of Mr Benedek Nicky, a nobleman and alleged ‘robber baron’. The death sentence pronounced by the board was carried out in the courtyard of the house. King Sigismund, renowned for always having financial difficulties, imposed a fine of 3,000 Forints on the town for handing down the sentence in an arbitrary manner.

During the reign of Matthias Hunyadi in the mid-1400s the building was mortgaged  and was passed into the ownership of Ulrich Grafenegger, town captain and land steward appointed by German Emperor Frederick III. When the pawn was lifted in 1463 the captain — who meanwhile lost his titles — failed to fulfil the public duties mandatory for house-owners at the time (e.g. patrolling the streets, putting a sentry on the town wall, paying taxes and doing public work). As a consequence, King Matthias donated the house to the town of Sopron in 1478. One half of the building, which was right adjacent to the wall, was purchased by a local citizen called Mátyás Schreiber for 100 Forints, while the building on the corner went to Mr Tamás Farkas whose descendants continued to be the owners until 1529. After a period of ownership documented under the names of various tradesmen and merchants, from 1628 the Artner family’s name was registered on documents. The Artners had been related to Sopron from as early as 1478 and played a key role in the life of the city for over 300 years; some of their 17-century offspring were typical representatives of Protestant intellectuals. A noted member of the family Erhard Artner II was the town’s notary and a qualified physician and worked with Kristóf Lackner. It was during the ownership of the Artner family when the Caesar House underwent Baroque refurbishment and when it received its current design in the late 1700s.

An extraordinary domestic event also happened here when the 1681 parliamentary session of the Upper House elected Prince Paul Esterházy to the office of palatine. From this time onwards, the house has been referred to as the “Green House” — following a custom prevailing in Bratislava. According to a document a noted poet of the times, István Gyöngyösi, recited a poem to welcome the new palatine but later he publically denounced his welcome poem.

After the Artners we know of many other families who resided in the same house including the Steiners, the Reichehallers and the Streckenbachs, all high-ranking citizens. In 1774, the land register recorded the Mártonys, who were also kept in memory by a piece of stone from 1775 preserved in the masonry of today’s gateway. It was their son, the military engineer Károly Kőszeghi‑Mártony who invented the gas mask and a breathing apparatus working with compressed air. Legend has it that he and his brother were raising small foxes in a hollow of the old town wall at the back of their courtyard. This mischief has not been entirely forgotten as the restaurant currently operating in the house bears the name “Foxhole” (Rókalyuk).

A prominent member from the times of the Austro-Hungarian Empire was Imre Ihász, a county-level judge who moved into the house in 1817. He also acted as patron of Sopron’s cultural and theatrical life, and worked as a literary translator. It was he who had the extra one-storey wing added to the building after the Rear Gate of the ancient town wall was pulled down. Writer Endre Csatkai must have been referring to Ihász — a relative of Hungarian prose writer Mór Jókai — when writing “no other house in Sopron could have a stronger link to the history of Hungarian literature then this one”.  Daniel Ihász, another member of the family, was Lajos Kossuth’s secretary when the politician was in exile. Rudolf Ihász, Sopron’s chief notary in the 1850s, and his son-in-law army soldier Gyula Caesar kept in close contact with Kossuth in emigration. This surgeon and his wife exchanged letters with Kossuth and they even met him in person as demonstrated by the Caesar family’s correspondence left to posterity. Another fact of cultural and historical importance is that the first secondary school for girls opened in this building in 1871 and advertised as “Sopron’s two-class upper girls’ school admitting applicants with all belief providing education in Hungarian and German”.  The descendants of the Caesar family continued to be the owners of the house named after them right up to 1952.

Today the house is most famous for its wine cellar called ‘Cézár Borozó’, opening after the extensive refurbishment in the 1950s. Its furnishing and internal design evokes the old-time local “Buschenschanks”, and over the entrance you can still see the sign — the ‘puschni’ — made of pine branches inviting wine-drinkers to enter the place. Visitors can see some wine-making equipment, a several hundred-year-old wine press, exquisitely carved barrels, a still functioning furnace, all set in an attractive and authentic space

Mr Horváth, Bertalan (1939-2009) architect and graphic designer, József Horváth’s son, founder and patron of the foundation set up to manage and exhibit the painter’s bequest